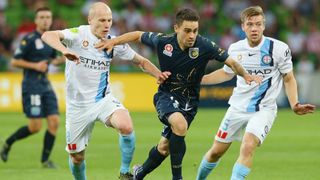 Manchester City have loaned out recent signing Anthony Caceres straight back to the A-League to their affiliate club Melbourne City.

The Premier League giants made the surprise signing of Caceres from the Central Coast Mariners last week, but the Australian midfielder will remain in his home nation on a loan deal with the Mariners' A-League counterparts.

The Melbourne-based club, who is owned by the City Football Group, confirmed the news on Tuesday.

"Melbourne City has signed midfielder Anthony Caceres on loan from Manchester City for the remainder of the 2015/16 season," the statement read.

"Caceres­, 23, arrives at Melbourne City after playing 62 matches in the A-League with Central Coast Mariners.

"He will link up with [Melbourne City coach] John van’t Schip’s squad this week and will be available for selection ahead of the club’s Australia Day Eve clash against Wellington Phoenix, next Monday 25 January at AAMI Park."

Van't Schip had previously denied that Caceres would arrive on loan from the club's Premier League affiliates.

Caceres is one of the hottest talents in the A-League and will provide a major boost to Melbourne's midfield as it hunts for a maiden premiership.

Van't Schip's side sits in fourth in the A-League table, just three points off Brisbane Roar who occupy top spot.