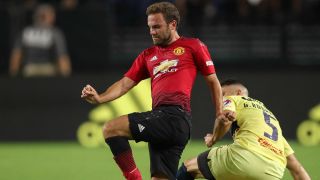 Juan Mata salvaged a 1-1 draw against America as Manchester United avoided defeat in their pre-season opener on Thursday.

A bullet header from Henry Martin in the 59th minute had Mexican giants America on track for victory in sweltering conditions in Phoenix, until Mata hammered home the equaliser with 12 minutes remaining.

The Red Devils – back in the United States for the second successive year – were missing a host of stars at University of Phoenix Stadium following the World Cup in Russia – Romelu Lukaku, Jesse Lingard and Marcus Rashford on holiday after Russia 2018.

David de Gea, Nemanja Matic and new signing Fred are expected to join the squad next week, while Alexis Sanchez is believed to be on his way to the United States after resolving his visa issues.

Jose Mourinho had lamented the situation, especially amid Sanchez's struggles getting into the country, but it provided Anthony Martial with the chance to impress.

Playing up front in the absence of Lukaku, Sanchez and Rashford, Martial – linked with a move away from Old Trafford – caused plenty of problems in the first half.

Martial fired a shot just over the bar in the 13th minute following some neat work from Demetri Mitchell inside the penalty area before the French star almost teed up Mata for the opener two minutes later – the Spaniard's low shot hitting the post.

Ooohhh close! nearly breaks the deadlock after some fine link-up play from !Watch live on : July 20, 2018

American goalkeeper Agustin Marchesin was called into action when Martial's deflected shot almost found the bottom corner of the net.

While United looked lively and threatening up front, the back four of Antonio Valencia, Eric Bailly, Chris Smalling and Luke Shaw had their hands full in defence.

And it was up to recruit and third-choice goalkeeper Lee Grant to keep United on level terms before half-time.

Signed from relegated Stoke City, Grant got down well to deny America in the 27th minute as the Mexican side enjoyed a good spell as Roger Martinez bulldozed his way through United's defence and forced the veteran into another save seven minutes later.

Grant was replaced by Joel Pereira at half-time and the 22-year-old – who is set to leave on loan for the 2018-19 season – prevented America from taking the lead eight minutes into the second period when he thwarted Martinez.

Pereira, however, was powerless to keep out Martin's header approaching the hour-mark as United conceded the opener.

A terrific cross from highly rated youngster Tahith Chong helped get United back on level terms – the teasing delivery picking out Herrera who hit the post before Mata fired home the rebound in the 78th minute.