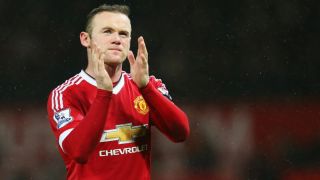 Wayne Rooney converted a 93rd-minute penalty as sluggish Manchester United edged past Sheffield United with a 1-0 win in the third round of the FA Cup.

Louis van Gaal's side were lacklustre for much of the match, but were handed a chance to progress at the death when substitute Memphis Depay was felled in the box by Dean Hammond.

United captain Rooney duly stepped up and confidently dispatched the spot-kick in the third minute of second-half stoppage time, crushing the League One side's hopes of forcing a replay at Bramall Lane.

After struggling to convert their dominance of possession into goalscoring chances, the hosts were met with a chorus of boos as they failed to score in the first half at Old Trafford for the 10th successive match in all competitions.

Van Gaal's team continued to lack adventure in the second period, although the introduction of Depay provided United with a new lease of life and his run down the left wing culminated in the decisive moment as he earned a penalty from referee Andre Marriner.

With Juan Mata taken off earlier in the game, Rooney was handed the responsibility of taking the spot-kick and he showed great composure to spare the blushes of the Premier League side.

United - who will be hoping a late knock to Bastian Schweinsteiger does not lead to a spell on the sidelines - started slowly despite dominating possession in the early exchanges and struggled to create opportunities to test visiting goalkeeper George Long.

Conor Sammon's powerful 20-yard strike was tipped over by David de Gea in the 18th minute, and, although the referee pulled play back for a handball by the striker in the build-up, it shocked Van Gaal's men into action.

Two minutes later, Matteo Darmian slid a pass into the box for the run of Rooney, who beat the onrushing Long to the ball but went too wide to go for goal and David Edgar did enough to hold him up before Jay McEveley blocked the attempted cross.

Just as quickly as they had burst into life, United receded to a slow tempo in which invention was severely lacking.

Rooney was beaten to Ander Herrera's pass into the box by a brave dive from Long, while Daley Blind fired over from 20 yards in first-half stoppage time.

There was no change from the hosts after the interval as they continued to labour as the Blades dealt with a series of crosses into the box.

In a bid to provide his side with an attacking injection, Van Gaal replaced the disappointing Mata and Herrera with Depay and Jesse Lingard on the hour mark.

Depay showed desire to get involved quickly and released an ambitious shot from 25 yards with 66 minutes played that swung harmlessly wide.

Chris Basham replied with the game's first shot on target that he scuffed straight into the arms of De Gea, while Darmian forced Long into a simple save in the 69th minute.

There was a late scare for Schweinsteiger, who required lengthy treatment following a collision with Basham in the 82nd minute, and did not look comfortable as he saw out the remainder of the match with United having already used their three substitutes.

Depay had been the best player on the pitch following his introduction and he won a penalty when his dribble into the box was brought to an end by the sliding Hammond.

Marriner pointed to the spot and Rooney showed the requisite composure as he lashed home from 12 yards, sending Long the wrong way and ensuring Van Gaal's team are in the hat for the fourth round.