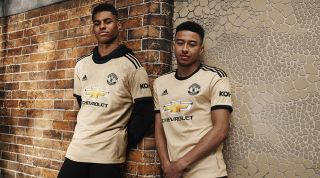 Manchester United have released their new away shirt for the 2019/20 campaign, featuring a “fresh savannah-toned aesthetic” (according to adidas, anyway).

There’s an intricate patterned design which takes inspiration from the mosaics that colour the streets of Manchester’s creative Northern Quarter – a subtle touch that complements the secondary black colour adorning the shoulders, collar, hem and club badge.

Manchester native and United fan Aitch has written a track to celebrate the launch, which can be seen on adidas and Manchester United’s social channels from today.

United will debut the new shirt on July 13 when they kick off their pre-season tour against Perth Glory in Australia.