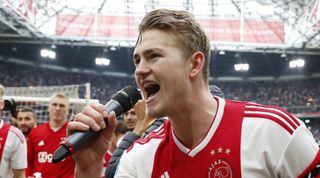 Barcelona have long been considered favourites to land the 19-year-old who led his team to the semi-finals of the Champions League this season.

Though Barça can offer Champions League football next season and an inevitable title challenge, the project is significantly different at Old Trafford.

It was reported that the Red Devils offered De Ligt a contract two weeks ago worth £12 million per year.

But now Ole Gunnar Solskjaer has sanctioned an improved offer for De Ligt, according to Catalan newspaper Sport, ramping up United's efforts to make the centre-back their marquee defensive signing of the summer.

With Ernesto Valverde reluctant to rock the boat in terms of wage structure at the Camp Nou, Ajax's prized asset could be heading to the Premier League rather than La Liga – although Juventus are also said to be keen on signing the young Dutchman.

FFT’s 20 favourite cult clubs of all time: is yours in there?​