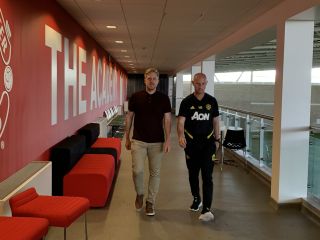 Manchester United academy chief Nick Cox believes young people have “never faced such a difficult time” and underlined the club’s duty of care in helping players cope with the impact of Covid-19.

While the first-team prepare to jet off to Germany for the Europa League on the back of their third-placed Premier League finish, life is more uncertain and unsettling for those trying to progress through the ranks.

United’s Under-23 team did not even know what division they would be playing in until Thursday, when they were promoted to the top division of PL2 on a points-per-game basis following last season’s abrupt ending.

Neil Wood’s second-string and the Under-18s have only recently been able to get back to training, while those below the youth team have yet to return to the field as this challenging, coronavirus-shaped period continues.

Head of academy Cox is acutely aware of the strain this is putting on young people, leading United to decide that no player under the age of 19 will be released due to the unique circumstances brought by the coronavirus situation.

“We took the decision, whilst people were on lockdown, that it just wasn’t right to release kids from the programme – and actually that we’ve got a role to play in the recovery,” he told the PA news agency.

“And I don’t say recovery lightly. There’s going to be a recovery process here. People have been through trauma. Different people, different levels of trauma.

“Some people won’t have been affected too much. Some people have had a really difficult period of time.

“The football club has a duty to assist and aid young people’s recovery from what they’ve just been through.

“They have been deprived of social interaction, they haven’t been hanging out with their mates, their routine’s gone, their structure’s gone.

“We’ve got a job to do to say ‘hey, at the end of all this come back with a smile on your face, play football, hang out with your mates’.

“So there was no way we were going to release anyone during that period of time and we managed to be consistent with that message right the way through to our very young professionals, or anyone that hadn’t made a senior appearance.”

Even with those players that were released, United provided support by inviting them back to train and creating information packages to aid their look for a new club. In addition, financial support was offered to a number of them.

But for those still in the system there is a variety of issues to contend with as the older age groups step up their return and “a bit more chilled out” approach is taken with the younger kids.

“There’s no need to catch up because we didn’t miss anything because no one’s been playing football,” Cox said. “We’ve got to use football as a vehicle to help people recover.

“Come back, reconnect, see your mates, have a great time, get a smile on your face, find some normality, find some routine, get some physical exercise, enjoy a bit of sunshine.

“And then once we’re back to some familiar ground, we can start to think about ‘what does the world look like from here on?’ from a football development point of view.

“But slow and steady is the answer right now. I think we all have a duty to look after young people, who have never faced such a difficult time. Full stop. Ever.”

Cox said the lockdown period was one of “crisis management” and making sure all connected to the club were being looked out for, with “football on the backburner” as they put “mental health to the top of the list of priorities”.

“Absolutely football was on the agenda,” he said. “But higher up the agenda was wellbeing, particularly for our younger players.

“We didn’t bombard people with regimented home programmers and ‘do X amount of press-ups’ and ‘run this distance’ and ‘do these drills’.

“We took the approach of just being a useful support network for players and their families.

“Being there if they needed us, giving them information on a regular basis, providing them with useful distractions, challenges that they can engage with, tasks that they could complete if they wanted to.

“And really encouraging them to be creative and to spend their time in a positive fashion through a really difficult period of time.”