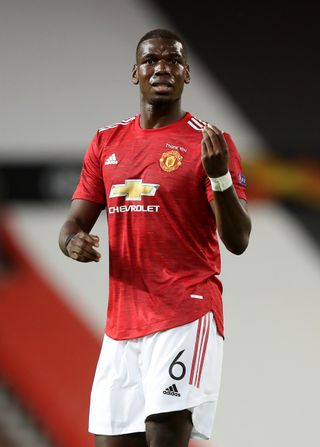 Paul Pogba will be absent for France’s Nations League matches and the start of Manchester United’s pre-season preparations after testing positive for Covid-19.

The 27-year-old has been enjoying some downtime since Ole Gunnar Solskjaer’s side were beaten in the Europa League semi-finals in Cologne 11 days ago.

Pogba was a key member of the United squad after the coronavirus break gave the midfielder time to recover from an ankle issue that had blighted his season, preventing him from representing France since last June.

The World Cup winner was due to make his long-awaited return to Didier Deschamps’ squad in the upcoming Nations League double-header against Sweden and Croatia, only to be ruled out having tested positive for coronavirus.

France boss Deschamps told a press conference: “I’ve completed at the very last minute a change in the list, because Paul Pogba, who was previously on the list, unfortunately for him he carried out a test yesterday which was returned as positive this morning.

“So at the last moment he had to be replaced by Eduardo Camavinga.”

The 17-year-old Rennes midfielder comes in for Pogba, whose illness is set to rule him out of the start of United’s pre-season preparations given training resumes on September 2.

A United statement said: “Pogba has been replaced in the squad after testing positive for Covid-19.

Here's the France squad that will meet up on Monday!!! 🤩 #FiersdetreBleus#SWEFRA#FRACROpic.twitter.com/ahBj6H4PKV— French Team ⭐⭐ (@FrenchTeam) August 27, 2020

“The midfielder will be unable to add to his 69 caps and 10 goals for his country in the games next month.

“Everybody at United wishes Paul a speedy recovery ahead of the new season.”

While Pogba has been sidelined, United team-mate Anthony Martial has made it into the France squad for the first time since March 2018.

The 24-year-old scored 23 goals in all competitions in 2019/20 – the same amount he managed over the previous two seasons combined.