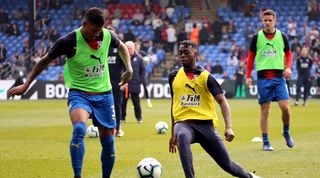 Ole Gunnar Solskjaer is set to make big changes to his first-team squad this summer after a disappointing campaign at Old Trafford.

The Sun believes that the Red Devils are planning a £50 million raid for the two Palace defenders, with Wan-Bissaka high on the club’s summer wish list.

Luke Shaw was recently named as the club’s Player of the Year, but Van Aanholt could be brought in to compete for the left-back spot next season.

The Netherlands international has two years remaining on his deal at Selhurst Park, and offers Premier League experience and an attacking threat.

Wan-Bissaka has been one of the breakthrough stars of the season in the Premier League, making 35 league appearances for Roy Hodgson's side.