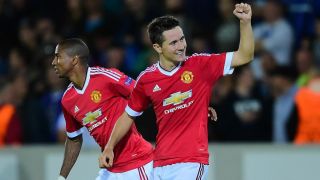 Ander Herrera is relishing the return of the FA Cup and hopes to see Manchester United make a winning start against Sheffield United on Saturday.

United have not lifted the trophy since 2004 and were knocked out by eventual winners Arsenal at Old Trafford at the quarter-final stage last season.

Herrera enjoyed what proved to be a short-lived stint in the competition last term and is eagerly awaiting the chance to go further in 2015-16, as United look to end a silverware drought stretching back to 2013.

"We didn't go too far in the last FA Cup but I enjoyed the games a lot," Herrera told MUTV.

"It's a great competition and the organisation in England is fantastic, I have to say. Now we start at home and it would be good to win. It's a very enjoyable competition and a nice one that we can hopefully win this season."

United alleviated some of the pressure on manager Louis van Gaal with a 2-1 win over Swansea City in their last outing, a result that ended their eight-game run without a victory.

But the former Netherlands boss has not enjoyed much success against lower-league opposition, having been knocked out of the League Cup by MK Dons and Middlesbrough in the past two seasons, and Sheffield United midfielder Paul Coutts is excited for his side's first visit to Old Trafford in nine years.

"There's nothing better than going to Old Trafford for a cup game against Manchester United," he told the club's website. "We know what they're about but we'll do our homework, work hard all week and look forward to it."

The home side have recalled Adnan Januzaj from his loan spell with Borussia Dortmund this week, but Saturday's game may come too early for the Belgium international to make his return to first-team action.

There is better news regarding Jesse Lingard, however, with the club hopeful of having the 23-year-old match fit again following a hamstring injury he picked up against AFC Bournemouth. Phil Jones (ankle) and Ashley Young (muscle fatigue) will face fitness tests.

Blades boss Nigel Adkins hopes to have striker Matt Done back from a hamstring injury, but has already warned he will not take undue risks with his first-team players ahead of Tuesday's game against fellow League One play-off chasers Wigan Athletic.

Adkins' side had enjoyed a run of four consecutive victories with only one goal conceded before they were beaten 3-2 at home by Peterborough United last weekend.

Saturday's game does not bear the hallmarks of a high-scoring affair: only nine goals have been scored in United's last nine home games in all competitions. And the visitors have only found the net five times in their last eight matches on the road.