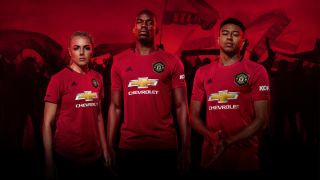 Manchester United have unveiled their home kit for next season which pays homage to the Treble-winners from the 1998/99 campaign.

The crowning achievement 20 years ago was their comeback against Bayern Munich in the Champions League final as last-gasp goals from Teddy Sheringham and Ole Gunnar Solskjaer sealed a remarkable 2-1 win.

However, the kit which marks that famous night in Barcelona will be worn in a season in which United – now managed by Solskjaer – will not be competing in Europe’s most elite club competition.

Solskjaer’s side settled for an underwhelming sixth-place finish in the Premier League, which was only enough to earn a spot in the second-tier Europa League, meaning their season could start as early as July 25.

Whenever the players do step on to the pitch, their home strip will have 91 and 93 on the sleeve to commemorate the minutes of the goals scored by Sheringham and Solskjaer.

The dates of the Premier League, FA Cup and Champions League conquests are also displayed on the bottom of the shirt, which will have a new club crest of bold black with gold stitching.

The goalkeeping jersey will come in a tiger pattern featuring a dark purple two-tone design in a reference to the one worn by Peter Schmeichel 20 years ago.

The kit will be worn for the first time in the Legends charity match against Bayern Munich on the 20th anniversary of their Champions League final, while United will debut it in pre-season against Leeds in Perth on July 17.