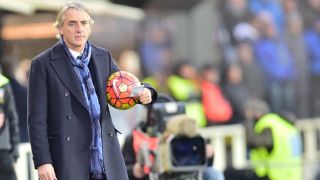 Roberto Mancini has challenged his strikers to improve their form after watching Inter draw 1-1 with Atalanta.

An own goal from Rafael Toloi salvaged a point from Saturday's clash for the visitors after Jeison Murillo had turned into his own net early in the first half.

Stevan Jovetic and Mauro Icardi had been criticised for their form together prior to the game and, though their link-up forced Toloi's error, they looked short of inspiration in a flat Inter attack for much of the game.

And Mancini insists his forwards must do more in the coming weeks if they are to sustain their title charge, telling Mediaset Premium: "I'm not happy, someone needs to do more to get these games won.

"I don't want to talk about individuals, we have good players in attack who must do more. It was a difficult match, but we gifted the first goal.

"We are not a side that scores many goals, which is why certain players must start scoring more.

"We did well to fight back from that own goal and get the point, but at times we try to do too much and get the simple things wrong. This is where we have to improve.

"We were on top of the table for 14 rounds, which means we have quality. We mustn't throw points away as we did against Lazio and Sassuolo. It's important to keep calm as we have the quality to get back there.

"The objective remains the same and if we stop giving away goals then I believe we can stay at the top for a long time."

Samir Handanovic made a handful of important saves to ensure at least a point for Inter, the pick of which was a spectacular sprawling stop to deny Luca Cigarini from close range.

"The goalkeeper is there to make saves and Handanovic had two or three situations where he did a great job," Mancini said of the Slovenia international.

Inter could now slip to fourth on Sunday should Juventus and Fiorentina win their respective games against Udinese and AC Milan.