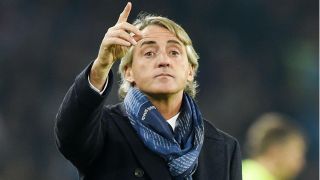 Roberto Mancini would gladly guide Serie A leaders Inter to 1-0 wins for the rest of the season.

Inter returned to winning ways as Mauro Icardi scored the only goal of the game at Empoli on Wednesday, chalking up a 12th victory of the season for Mancini's men and a ninth by a 1-0 margin.

This has added to perceptions of the San Siro outfit employing an overly conservative style, but, with his team holding a slender advantage over Fiorentina and Napoli at the Serie A summit, Mancini was happy to gently goad his critics ahead of Sunday's match against Sassuolo.

"I love a 1-0 win and if we win the next 15 matches by that scoreline then that would be perfect," he told a pre-match news conference.

"There is so much chatter but we like hearing other people talk about us."

Victory over Sassuolo would guarantee top spot for Inter at the halfway stage of Serie A, despite few tipping the team for major honours at the start of the season.

During his coaching career, Mancini has often been accused of harbouring confrontation with his players, but he believes the harmony and intelligence within this Inter squad is a key to their success.

"You need good, intelligent lads in any dressing room," he said. "They have a great relationship.

"Sometimes in a family there are disagreements – it can happen between parents and their children so just imagine having 30 people from different countries.

"This is the best squad I've ever had in that regard and I've barely ever heard them have any problems."

Nevertheless, the 51-year-old offered a word of caution that concentration and performance levels must not drop this weekend or during the forthcoming trip to Atalanta after a close shave at Empoli.

"I hope the side has realised how important it is to maintain their concentration," he added.

"Empoli, Sassuolo and Atalanta are all quite similar games – they all have good managers who prepare for matches well.

"We had to dig in at Empoli but we knew that would happen. We'll need to be 100 per cent alert against Sassuolo."