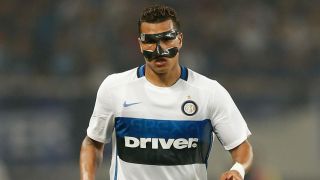 Roberto Mancini is optimistic that new signing Jeison Murillo was not seriously injured during Inter's pre-season friendly defeat to Bayern Munich on Tuesday.

The Colombia international impressed at the Shanghai Stadium before his debut was cut short before half-time, with Bayern going on to win 1-0 courtesy of a Mario Gotze goal 10 minutes from time.

"Murillo made a good impression: he's got a strong character to go with his physique. It's a shame he picked up that knock but I don't think it's anything serious." he told reporters.

"Kovacic played very well in that position and it wasn't at all easy because we were up against a full-strength Bayern side." said Mancini.

"Kondobgia did well too. He's only been training with us for 10 days and I think he'll need a bit more time to find his best form but I'm happy with his performance all the same.

"Bayern are a great team who play superb football. They're awash with talented players and have an excellent coach.

"Of course we're not on a par with them at the moment but we need to improve – both our football and our results."

Inter travel to Shenzhen to face city rivals Milan in the International Champions Cup on Saturday.