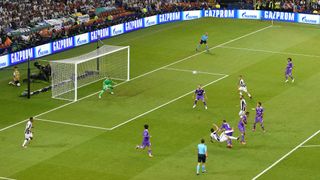 Saturday's Champions League final certainly lived up to its billing as the greatest game in club football, and there was one moment that will live long in the memory of those present in Cardiff.

Mario Mandzukic ended up on the losing side as Juventus succumbed to a 4-1 defeat to Real Madrid but he will take some solace from the fact that he might well have scored the greatest goal in the history of the modern tournament's final matches.

The Croatia international's stupendous volley had the Principality Stadium on its feet and must even have drawn a wry smile from the watching Zinedine Zidane, who has previously been credited with the best strike in this showpiece.

So does Mandzukic's effort rank as the best among this esteemed company? We'll let you decide. To make matters somewhat simpler, we've kept it just to Champions League finals, so nothing from 1992 or earlier.

The clash in Athens was something of a rude awakening for Johan Cruyff's 'Dream Team', the trophy holders and firm favourites going into the match.

As it was, Barcelona were out-thought and outclassed by AC Milan, who won thanks to a double from Daniele Massaro and spectacular goals from Dejan Savicevic and Marcel Desailly.

Desailly is unfortunate not to make this list, with Savicevic edging out his team-mate thanks largely to the sheer audacity of his effort.

Emerging with the ball down the right touchline, he glanced up before launching a sublime lob that soared over Andoni Zubizarreta and into the net.

Borussia Dortmund's triumph in Munich is better known for another goal – one that also features in this list – but this one is a stand-out from Alessandro Del Piero's mightily impressive back catalogue.

Midway through the second half at the Olympiastadion, Alen Boksic drove down the left byline and cut the ball back towards Del Piero, who produced a devilish backheel that put the ball beyond Stefan Klos and into the net and left defender Jorg Heinrich bamboozled.

The goal did not count for much as Dortmund went on to lift the trophy, but it was a quite brilliant moment in its own right.

This was a final blessed with two memorable goals, the latter of which is widely regarded as one of the best in Borussia Dortmund's storied history.

With the score at 2-1 after Del Piero's moment of magic, the Germans were desperate to land a killer blow and seal their first European crown. Cue the arrival of substitute Lars Ricken.

"I'd been sitting on the bench, studying the game and I noticed that [Juventus goalkeeper] Angelo Peruzzi was always positioned far from his goal," he explained later. "I said: 'If I come on, the first thing I'm going to do is shoot, no matter where I am'."

He did. Within 16 seconds of appearing from the bench, 20-year-old Ricken collected Andreas Moller's pass on the break and rifled the ball up and over Peruzzi and into the net from close to 35 yards out.

The all-Spanish affair at Stade de France proved to be pretty one-sided, with Fernando Morientes, Steve McManaman and Raul on the scoresheet to give Madrid their second Champions League crown.

McManaman did not always convince everybody in the Spanish capital of his quality but there can be no disputing the skill he demonstrated to pull off this wondergoal.

Roberto Carlos' long throw into the penalty area was headed away to the edge of the box, where the England man arrived to connect with a first-time scissor-kick volley that flew beyond Santiago Canizares and into the bottom-right corner.

Bayer Leverkusen were the surprise package of this tournament and were determined not to let the occasion of their first Champions League final pass them by without a fight.

Lucio cancelled out Raul's eighth-minute opener to leave firm favourites Real Madrid in need of a moment of inspiration to get them back on track.

It came in the 45th minute. Santi Solari played a long ball down the left to the overlapping Roberto Carlos, who crossed the ball to Zinedine Zidane on the edge of the area.

The France star met it with a left-foot volley that arced into the top corner and became widely regarded as the finest goal ever scored in a European final.

Arguably the greatest club team in history deserves to have an entry in this list.

Pep Guardiola's all-conquering Barcelona claimed their second Champions League in three seasons by beating Manchester United at Wembley, the same opponents they defeated in 2009 in Rome.

While that had been a closely-fought affair, the match in London was more one-sided. Barca's opener through Pedro was cancelled out by Wayne Rooney but they fully deserved to regain the lead through Lionel Messi, before David Villa produced a moment of the highest quality.

United failed to clear their lines after a dazzling Messi run and Sergio Busquets laid the ball back to Villa, who took a touch before curling an inch-perfect shot beyond Edwin van der Sar and into the top-right corner from the edge of the box.

Like 2011, the 2017 final showed signs of a close encounter only for the Spanish side to pull clear with a dominant second-half performance.

It is unlikely to make the bitterness of a second final defeat in three seasons more palatable, but Mandzukic's goal could go on to be regarded as one of the greatest ever scored in the competition.

The ball did not touch the ground from the moment the move started until it was in Keylor Navas' net. Leonardo Bonucci sent a raking long pass to Alex Sandro, who volleyed the ball across towards Gonzalo Higuain 12 yards out.

The striker controlled and flicked it into Mandzukic's path and the Croatian chested it down and hooked a stunning overhead kick that sailed over Navas. Incredible.