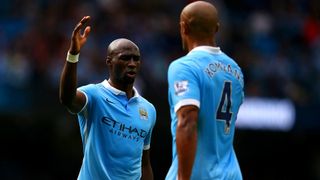 Pep Guardiola has challenged Eliaquim Mangala to prove his worth to Manchester City after Vincent Kompany's latest calf injury and the failure to sign a new centre-back offered the France international a potential reprieve at the Etihad Stadium.

Mangala arrived for a reported £32million from Porto in August 2014 but, after impressing alongside Kompany on his debut in a 1-1 draw with Chelsea, the powerful defender turned in regularly error-strewn performances.

After two seasons of failing to iron out his flaws under Manuel Pellegrini, the 26-year-old spent last season on loan at Valencia.

Mangala has also fallen out of contention with Les Bleus and was linked with an escape from his time in Manchester as an expensive flop, with both Crystal Palace and West Brom understood to be in for the centre-back on deadline day.

Those moves, much like City's bid for West Brom's Jonny Evans, did not come to fruition and, with Kompany laid low for Liverpool's visit on Saturday, the unwanted Mangala now finds himself very much in the first-team picture.

"He is here because he is willing to play and [has] a good attitude to play," Guardiola told reporters.

"I know his quality. He is a real central defender. We are going to help him a little bit with the little details in the build-up to help him to improve.

"I spoke with him after the deadline and said, 'You are part of the group, you have to win my confidence on the pitch and after that we are going to decide'."

Guardiola made no bones about the fact he wanted reinforcements at centre-back but pointed to the high turnover in full-backs in his squad – Benjamin Mendy, Kyle Walker and Danilo all arriving at considerable expense after Pablo Zabaleta, Bacary Sagna, Gael Clichy and Aleksandar Kolarov headed for the exit – as something that restricted City, who were also unable to get a £60m deal for Alexis Sanchez over the line.

"We wanted one, yeah, but we were not able. Sometimes it is not possible," he said.

"Jonny Evans was an idea but my colleague [West Brom boss] Tony Pulis put a price we couldn't afford in that moment and that is the reason why.

"We had a little bit more money to spend but not much more. We could not go without any full-backs. It was a real priority.

Similarly, Guardiola had no gripes with Belgium boss Robert Martinez after Kompany picked up the latest in his catalogue of calf problems during the Red Devils' 9-0 mauling of minnows Gibraltar – an injury that should offer plenty of encouragement to Liverpool's rampant attack this weekend.

"I'm not a guy to call the manager of the national team and tell them what they have to do," Guardiola added.

"When I was at Barcelona, seven, eight or nine players played for Spain. I never called Vicente del Bosque to say you do not have to play them.

"It is their job, it is their business. They have to qualify for the World Cup in Russia. That's why they use the players.