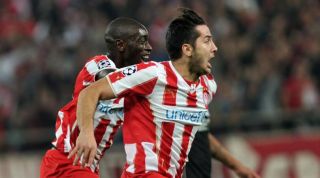 On a busy day for the Italian giants, Benatia completed a move to Bayern Munich on Tuesday as Manolas arrived from Olympiacos.

Manolas, though, has backed himself to quickly banish memories of his predecessor.

He said: "Benatia is a brilliant player. But he's the past; I'm the present."

Manolas also revealed that several other clubs - including Serie A champions Juventus - had been interested in securing his services, adding: "I had offers from several big clubs, including Juve. But it was my decision to come here to Roma.

"I wanted to come to Roma. Lots of people told me good things. Their advice and my decision is what brought me here."

In the end, it was Roma's "big goals" that persuaded Manolas to choose them.

The Greek revealed: "The club has big goals. I want to win the Scudetto, as does the whole squad. We can also go far in the Champions League.

"I know the club has great expectations and I feel up to it. I will work hard so I don't let the club down."