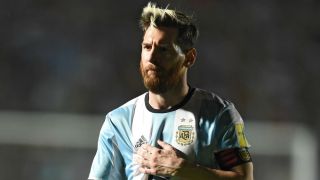 Argentina legend Diego Maradona is adamant Lionel Messi is a phenomenon regardless of whether he guides his country to World Cup glory or not.

The Barcelona star has won five Ballons d'Or during his illustrious career and is widely regarded as one of the greatest ever.

There has also been criticism over Messi's failure to secure international honours, however, with Argentina's best World Cup display with him in their side coming in 2014 when they were beaten in the final by Germany.

He has had even more heartache in the Copa America where the Albiceleste have finished as runners-up on three of the four tournaments Messi has featured in.

Maradona has stressed Messi's lack of international success does not take anything away from his achievements, though, and has pointed out he did not win the 1986 World Cup on his own.

"I am not going to tolerate that people say Messi is not the phenomenon that he is because he did not win a World Cup," Maradona told TyC Sports.

"Messi is a great player, regardless of whether he won the World Cup or not. At the age of 56, I can say that I have never seen anyone like Messi. I thank God that Messi is an Argentine. We have Messi, the Pope and me...

"Why would we burden him with claims that he is not a phenomenon if he does not win the World Cup? I won it because I got to play with guys like [Ricardo] Giusti, [Jorge] Burruchaga, [Nery] Pumpido, [Oscar] Ruggeri and many more..."