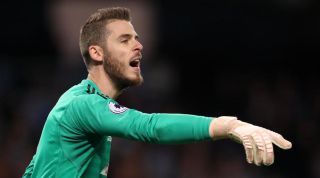 Marcus Rashford has praised David de Gea for his performance in Tuesday's 3-1 defeat by Manchester City.

United were comfortably beaten by their local rivals at Old Trafford in the first leg of their League Cup semi-final.

City stormed into a 3-0 lead in the first half, before Rashford pulled one back for Ole Gunnar Solskjaer's side after the break.

But the England international believes United's "world-class" goalkeeper was responsible for keeping the team in the tie.

“For me, it wasn’t the goal that gives us a chance,” he told United's official website. “David made three or four world-class saves and that’s the reason we’re still in the tie. We have to understand that.

Rashford captained United for the first time on Tuesday, with Ashley Young and Harry Maguire both absent from the starting XI.

And despite a disappointing night in terms of the result, the Red Devils academy product was proud to lead the side out.

“It’s a nice feeling to captain the side for the first time, but it’s the result that matters and we didn’t manage to get the win,” he said.

United find themselves in a difficult position at the halfway point of the tie, but they did overturn a similar deficit against PSG in the Champions League last season.

“It’s a different game, different players,” Rashford added. “But what we found in Paris, we have to find that in us again. We have to go there and score goals and win the game.”