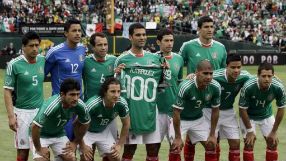 It was Mexico's second win in as many matches under new coach Jose Manuel de la Torre, whose team beat Bosnia 2-0 last month.

Andres Guardado scored the other goal in California as Mexico beat their South American opponents for the second time in a row after a 6-0 rout at the 2007 Copa America in Venezuela.

All three of Mexico's goals were scored in the first half with "Chicharito" Hernandez opening his account with a header in the seventh minute from midfielder Pablo Barrera's right cross.

Guardado then took a pass from captain Marquez - who was given a statuette and a Mexico shirt with the number 100 on the back in a ceremony before kick-off - and scored with a fierce left-footed drive in the 28th minute.

Hernandez found the net again in the 34th after a one-two with midfielder Gerardo Torrado.

Mexico are preparing to defend their CONCACAF Gold Cup title in the United States in June, while Paraguay will play the Copa America in Argentina in July.