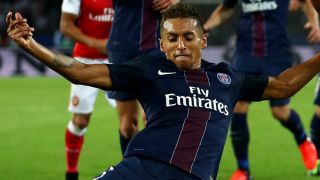 Marquinhos said he will "100 per cent" remain a Paris Saint-Germain player next season, while team-mate Marco Verratti reiterated his commitment to the Ligue 1 giants.

PSG defender Marquinhos, 23, has reportedly emerged as a target for Barcelona and Manchester United.

However, the Brazil international declared he is staying put following PSG's 5-0 rout of Saint-Etienne on Sunday.

"My future? I will be here next season to win back the title," Marquinhos told Canal+.

Of the match, Marquinhos said: "We were really motivated and the atmosphere was fantastic. It was very important to score the first goal at the start of the game.

"After a quarter of an hour, Saint-Etienne got back into it a bit but we were solid defensively and Kevin [Trapp] was important behind us. We were able to make the most of our chances and that is what made the difference. Even at 2-0, we showed a real hunger to play and score.

"I am happy for Lucas [Moura] with his double tonight. He was instrumental in attack."

In another boost as Monaco moved within a point of dethroning PSG and claiming the Ligue 1 title, Verratti also expressed his happiness in the French capital.

Verratti's future in Paris has been a hot topic throughout the season, despite his contract not expiring until 2021.

Asked if he will be at PSG next season, Verratti responded: "Yes. I'm under contract in Paris and I like it here."