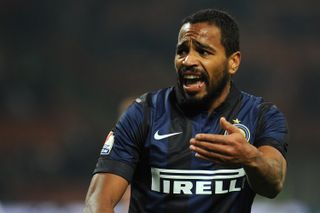 Uruguay international Pereira joined Inter from Porto in August 2012 but has made just seven appearances for Walter Mazzari's side so far this season.

The 28-year-old has been linked with moves to both Marseille and Premier League club Tottenham as speculation mounts over his future at San Siro.

And Labrune revealed that the Ligue 1 side are keen on acquiring the left-back, but feels a move may not be possible until the end of the campaign.

"He is a player that we like and are interested in although perhaps more for the summer than for January," Pereira told RMC.

"We have little money available at the moment and cannot do so much on the market at this time although we are working to solve this problem perhaps if someone leaves."

Marseille - who sit sixth in Ligue 1 following a run of four games without a win - have yet to make any moves in the transfer window, although the Stade Velodrome club have sent forward Jordan Ayew on loan to Sochaux.