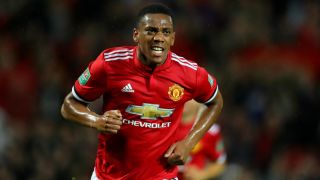 In-demand forward Anthony Martial is fully dedicated to delivering on his potential for Manchester United, according to team-mate Ander Herrera.

Martial's future at Old Trafford continues to be a subject of speculation with the likes of Chelsea, Bayern Munich and Tottenham all rumoured to be interested.

The 22-year-old, who was overlooked by France for the World Cup, has been restricted to just 18 starts in each of the past two Premier League seasons.

His agent last month declared the former Monaco man was ready to leave in search of more opportunities, but midfielder Herrera claims Martial still has plenty to offer the Red Devils.

"He's very talented," Herrera told reporters. "He can be one of the best players in the world and I think he is very, very focused this season to smash it.

"When you have players like Anthony, like Marcus [Rashford], Jesse [Lingard], Juan [Mata], Alexis [Sanchez], those kind of players that can change the game.

"If one of them cannot play, we have three or four more so we have lots of options. I think we shouldn't think that any other club in the Premier League has better players because at least we have as good as the opponents.

"Now it's all about work, confidence...I am confident with them because they are all amazing players and Anthony looks very sharp."

Herrera and Martial are currently part of United's pre-season tour of the United States, which next sees them meet San Jose Earthquakes in California.