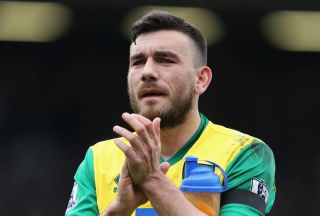 Snodgrass was one of the better performers in a dismal campaign for Norwich, but was unable to prevent the Carrow Road club from succumbing to relegation from the Premier League.

The Scotland midfielder is expected to be in demand once the window reopens, while goalkeeper John Ruddy, who missed out on a place in England's FIFA World Cup squad, could also be on his way out.

And full-back Martin anticipates plenty of speculation surrounding the pair following Norwich's drop into the Championship.

"I'm sure there will be Premier League clubs who want some of our players," Martin told The Eastern Daily Press.

"Some of them have shown they can do a job at that level for the past two or three years.

"If that happens, which it will and it will also happen at the other relegated clubs, then it is up to the board to do what is best.

"In terms of Snoddy, I would be surprised if no-one came in for him. John signed a massive new deal earlier this season and I know both are happy here but it depends on what other Premier League clubs and managers want to do and how much they want them and what this club decides it wants to do.

"There will be lads who perhaps feel they don't want to play in the Championship or who deserve to stay in the Premier League but that is up to someone else to decide."