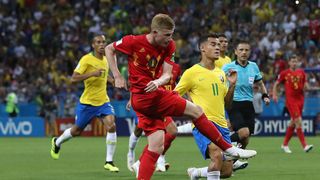 De Bruyne scored a fabulous goal as the Red Devils stunned Brazil 2-1 in Kazan to set up Tuesday's semi-final clash against France.

Following the rollercoaster 3-2 win over Japan in the opening knockout round, Martinez opted for a more conservative midfield set-up to tackle Brazil – pairing Axel Witsel with Marouane Fellaini to unleash De Bruyne into a roving attacking role.

It was viewed by many observers as a breakout display at Russia 2018 for the Manchester City star, but Martinez feels his efforts when stationed deeper alongside Witsel during Belgium's earlier games were also pivotal.

"The recognition of Kevin De Bruyne's performances before the Brazil game was a little bit unfair," he told a pre-match media conference in St Petersburg.

"Sometimes that's not as attractive to see. For us he was as important against Panama and Tunisia as he was against Brazil."

Martinez went on to observe how De Bruyne's exceptional vision, range of passing and reading of a game make him a fans' favourite when he operates in the final third, while the same qualities can also be more subtly decisive from deep.

"For me, Kevin De Bruyne is the modern playmaker," he said. "We are used to seeing these playmakers who stop the game. They take an extra second and allow the game to go into what they want to see.

"Kevin De Bruyne is a modern playmaker in the fact that he goes even quicker than what you can see. His level of execution is exceptional. When he plays a bit more in the final third his performance is very, very attractive.

"Maybe then he gets a bit more recognition. We appreciate him in every role. It is essential to have a player like Kevin who can play different roles.

"He plays as a number six, as a number eight, as a false nine, he can play out wide. Apart from goalkeeper I could tell you he can perform in any position. That's the quality that he has."

De Bruyne's versatility has come to the fore at City under the guidance of Pep Guardiola.

He was the Premier League and EFL Cup winners' outstanding player last season and, alongside club captain Vincent Kompany, the 27-year-old believes some of the lessons learned under the Catalan tactician are serving to benefit Belgium.

6 - Kevin De Bruyne has scored six of his last seven goals for Belgium from outside the box. Range. July 6, 2018

"I think Pep helped me to perform better as an individual," he said.

"It's a totally different style of playing where you need time as a team to adapt to it. But once you get it, it makes football easier.

"I guess you need more time to do things like Pep does. We are an attacking team. We like to play football on the ground. We have power. Some things are like the way we play at City."