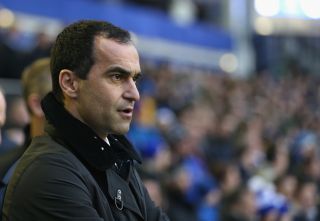 Martinez made five changes from the side that drew 1-1 with Stoke City in their last Premier League encounter, but the Merseyside club had no difficulty in brushing aside their Championship opponents to progress to the fourth round of the competition.

And the Spaniard was delighted with the performance, which he believes highlighted the array of options he has at his disposal.

"We had big senior players out of the side," Martinez told Everton's official website. "When that role is fulfilled by youngsters it is important they do it with responsibility and enjoy their football, and I thought that was the case.

"Joel Robles came in with Bryan Oviedo, and there was the partnership with John Stones and Antolin Alcaraz. Everyone fitted into the team structure and looked like they had been playing together for a long time.

"It's the competition for places that we need. That strength in the squad will allow us to have a confident outlook and we have got a lot of people who we can rely on."

The win kept alive Everton's hopes of winning the FA Cup for the first time since 1995.

Martinez's men face League One Stevenage in the next round, but the boss - who won the trophy with Wigan Athletic last season - is keeping his feet on the ground.

"We always work towards perfection but there is a long way to go and we want to keep developing," he added.

"The pleasing aspect is that there are sensational signs - the way we are playing in the final third, the way we are controlling games and the youngsters fulfilling big roles.

"But football is very simple. We move on from here and then concentrate on the Norwich game (in the Premier League on Saturday). We will take every game as it comes."