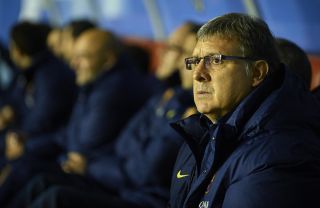 Sandro Rosell stepped down from his position as president of the club on Thursday amid the ongoing row surrounding the club's signing of Neymar.

Barcelona subsequently explained the full transfer process, together with the figures involved, in a press conference and the extra attention on the club has not been ideal for Martino.

"It isn't the situation that you want," he admitted. "We all want to do a good job and complete it together. I respect the president's decision.

"We'll focus on the sporting side and try to perform well; that's what we can contribute. That is our job and is the only thing we - the players and the coaches - can do to collaborate in this situation."

Having confirmed Andres Iniesta will not feature against Malaga, Martino expressed confidence that Barcelona know what to expect from their opponents.

"It's very probable that we'll take the lead role and Malaga will play on the counter (attack)," he added. "We know how to play that kind of match, but sometimes the opponent enjoys success that way.

"Above all what we have to focus on is making the most of that first chance we get to score, which opens up the game."