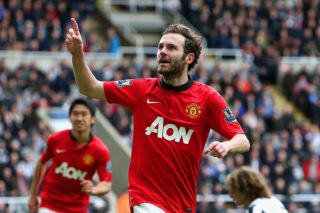 Moyes' 10-month tenure at Old Trafford proved to be a forgettable one, as United crumbled in their bid to retain the Premier League title and failed to qualify for next season's UEFA Champions League.

Mata - who was signed by Moyes for a club-record £37.1 million fee in the January transfer window - has openly thanked the former Everton manager for luring him to United from Chelsea.

"I don't want to forget that, since the beginning of the week, David Moyes is no longer our manager," Mata wrote in his personal blog.

"I wish him and his technical staff the best of luck in the future and I thank him for his continuous interest in me and his importance during my transfer to become a Manchester United player."

Interim manager Ryan Giggs started his tenure with a 4-0 rout of lowly Norwich City on Saturday.

Mata - who scored twice after coming off the bench against Norwich - is delighted with how the Welshman's managerial debut panned out and is happy to reward supporters who have endured a testing season.

He added: "It was Ryan Giggs' first game as a manager after plenty of years of success on the pitch, and the truth is everything went well.

"Our fans deserve that, indeed.

"They deserve scores like this one because, in this tough season, they have gone home with a downcast face too many times."