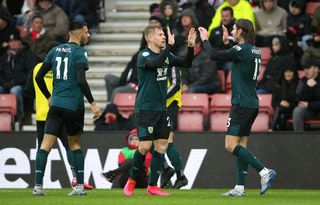 Matej Vydra’s first goal in 17 months made it three wins in four for Burnley in the Premier League after a 2-1 victory at Southampton.

After Ashley Westwood and Danny Ings had traded first-half goals, Clarets boss Sean Dyche saw substitute Vydra pop up with an excellent winner on the hour mark at a rain-soaked St Mary’s.

Hot on the heels of last weekend’s tormenter Storm Ciara was Storm Dennis and with it brought heavy rain and strong winds.

Saints debutant Kyle Walker-Peters was straight into the action as he conceded a corner in the second minute.

Westwood went over to take and scored the opener after 93 seconds.

The midfielder curled a cross into the front post and Southampton forward Ings let it go anticipating the ball would go out for a goal kick, but it crept in before Alex McCarthy could stop it going over the line.

Bee Mee converted the rebound for good measure, but it was Westwood’s goal and Storm Dennis had already made its mark.

Hasenhuttl’s men recovered from their poor start and began to dominate, but a sliced effort by captain Pierre-Emile Hojbjerg in the seventh minute failed to even go out for a throw.

Stuart Armstrong saw an effort deflected over by Burnley defender James Tarkowski not long after before the equaliser did arrive.

Former Burnley striker Ings looked to back heel into the path of Armstrong and while that was intercepted, he was first to the loose ball and curled into the corner from outside the area with 18 played.

It atoned for 27-year-old’s part in the opener and was his 15th goal in the Premier League this season.

Burnley’s problems increased when Chris Wood could no longer continue due to injury and was replaced by Vydra.

Jack Stephens nearly put Southampton ahead eight minutes later, but his deft header from Sofiane Boufal’s delivery hit the crossbar and bounced away to safety.

Another injury occurred before the half was over, with Boufal forced off six minutes before the break as Moussa Djenepo got the nod to take his place on the left wing.

Even heavier rain arrived at the beginning of the second period, but Vydra gave the away fans something to celebrate on the hour mark.

Jeff Hendrick’s ball forward was superbly controlled by the substitute, who took a touch to get away from Walker-Peters before he rifled an effort into the top corner.

It was only his second league goal for Burnley after largely being restricted to cameo roles since moving to Turf Moor in August 2018.

The frustration of the Southampton supporters was audible with 20 minutes left when goalkeeper McCarthy rushed his clearance and fired the ball straight out of play.

Hasenhuttl introduced forward Michael Obafemi in the 73rd minute and switched to a 3-4-3, with right-back Walker-Peters making way after a solid debut.

Saints continued to create chances, but also struggled to hit the target with two efforts in quick succession from Armstrong going over.

Burnley, who were the better side after the break, had to survive a late VAR check, but Mee was adjudged not to have deliberately handled in the penalty area before Nick Pope denied Hojbjerg as they moved up to 10th.