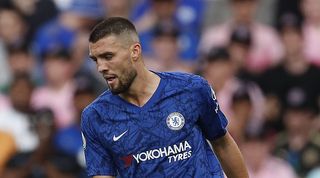 Mateo Kovacic has called on Chelsea to become more clinical in front of goal as they target success on multiple fronts this season.

Frank Lampard's side progressed to the fifth round of the FA Cup with victory over Hull on Saturday.

The Blues are also leading the race for fourth place in the Premier League, and will face Bayern Munich in the last 16 of the Champions League next month.

However, Chelsea have struggled to turn dominance into goals at times this term, and Lampard was critical of his team's lack of cutting edge against Hull last weekend.

Kovacic has echoed the thoughts of his manager and believes Chelsea must be less profligate in the coming weeks.

“It was a tough game, as we knew that it would be, but we need to score in the first half two more goals," he told the club's official website when asked to reflect on the win against Hull.

“That’s our problem in this moment but obviously we’re happy to go through.

“It was tough because we didn’t score on time - we had some chances and we didn’t use them.

“In training, we are working on it but we are still a young team, a new team, and we need to improve a lot.

“We need to take our chances, which in this moment we are not doing great, but we have time to improve and I am sure we will do.

"They scored a goal from a free-kick, which was my mistake. I did a little bit of a strange jump and the ball touched me. Sometimes that can happen but the most important thing is we got the win and we are through.

“The FA Cup is a great competition and we want to win it.”

Chelsea return to Premier League action against Leicester on Saturday.