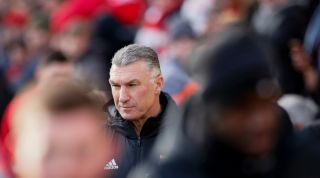 A quick way to judge how a head coach is viewed by the football public is to pay attention to the conversations which surround him after he takes over a new team.

There are, of course, many different reasons why a club would change its manager, but it's rare for it not to be linked, in some way at least, to underperformance. Generally speaking, then, it can be broadly assumed that most appointments are made with improvement in mind. Whoever takes over will be inheriting a mess: unhappy players who are conceding lots of goals.

Then it gets interesting, because what follows depends on profile.

One type of coach is expected to inspire an immediate spike in performance. For example, Nigel Pearson at Watford or David Moyes at West Ham. In fact, expectations seem to depend entirely on that happening and, if it doesn’t – if there is no instantaneous reaction – then the merits of the appointment itself quickly seem to fade away.

Fortunately for Pearson, he is having the desired effect. Watford may have recently lost to Aston Villa, but they’ve seemingly become a better football team overnight. They appear better motivated (hardly surprising, given that team harmony was a big issue prior to him taking charge), their defending is more disciplined and organised and, from nowhere, they’ve suddenly found the ability to create chances.

Moyes hasn’t been so lucky. After an initial bounce, West Ham have fallen flat again and whatever virtues their coach is presumed to have, none of them hold greater weight than the quick difference he was supposed to make.

It’s interesting, particularly in contrast to what happens at the other end of the spectrum, where ideologues are appointed and their vaunted philosophies are rolled out, inch by inch. The expectation then is not for immediate improvement, but – conversely – almost for players to be flummoxed by the complexity of what they’re being taught and for team cohesion to further disintegrate.

In fact, the more chaotic the better. That’s the luxury afforded to the high priest. In that situation, the problem is with those interpreting their vision, not the vision itself or how well it’s being imparted. Think of Louis van Gaal at Manchester United, Maurizio Sarri at Chelsea or, currently, Jose Mourinho at Tottenham. When those teams were – or are – at their worst, people are still willing to argue that it was some House of Mirrors-style reflection of the coach’s greatness. As if there's comfort to be found in the dysfunction and that botched clearances and disconnected football are not things to be frustrated by, but actually harbingers of the great days ahead.

It’s a really interesting contradiction, perhaps informed by a strange kind of snobbery. It describes this belief that if a coach is able to improve a team in a meaningful way very quickly, then he must be a short-termist and, by definition, not really to be taken seriously. That’s a strange perspective, particularly as the currencies those types tend to deal in are universal strengths; what’s short-term about defending better, scoring more goals and being harder to beat?

It manifests in how much patience is permitted, too. The head-coaches at the very top of the game are allowed to talk in transfer-windows and budgets. Their work is accepted as a gradual process that demands constant funding, which can only be seen properly after several years and a £500m non-refundable deposit. They’re not building a football team, they’re chiselling a mosaic - and you must not look until it’s finished, until the very last piece is in.

If you do, more fool you.

Imagine granting that sort of latitude to a civilian coach. Imagine these little armies gathering around a Pearson, a Moyes or whomever else and insisting, straight-faced, that it’s unreasonable to expect any kind of uptick in performance for at least six months. Imagine one of those coaches making that point at interview, insisting in October or November that no basis for judgement can possibly exist until at least the rest of the season had passed and he’d had the benefit of a full pre-season.

Shouldn’t it really be the same for everybody?

QUIZ Can you name every manager to face Sean Dyche in the Premier League?