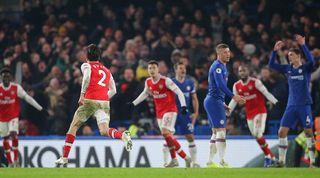 When Arsenal lost to Chelsea before the turn of the year, in Mikel Arteta’s second game in charge, the result belied an encouraging performance betrayed by individual mistakes. The tone had been determined, but a lot of the positives which should have been drawn - in retrospect - were scared away by the nature of the collapse.

The goalkeeping error, the midfield being caught hopelessly out of position, the defeat snatched from the jaws of victory. Unfortunately, those were the tenets of an old era, so it was difficult to celebrate a new Arsenal while the old one seemed so alive and well.

Tuesday night initially brought more slapstick. First in Shkodran Mustafi’s hopeless back-pass and then in the ridiculous David Luiz decision which saw him sent from the field. But it also brought great encouragement. Old Arsenal had staggered drunk through the door, ready to make everybody cringe one more time, but - this time - was quickly grabbed by the collar and tossed out into the street.

Instead of playing with their patented fatalism – that great sulk they wear whenever things don’t quite go their way - Arsenal responded to the situation with fire. It’s been less than six years since they were beaten 6-0 at Stamford Bridge after another early red card and that game, which was played in horrible, burning sunshine, continues to inform expectations. It's part of the template for what happens to Arsenal when the odds are against them; it's the most vivid example of their capacity for surrender.

But this was its counterpoint.

The conversation about Mikel Arteta continues to be about his lineage. Because of Pep Guardiola’s patronage, the obsession – for now – will be over whether he can coach that familiar, percussive rhythm into Arsenal’s football and make them stylistically similar to the team he left behind. Maybe. Maybe not. That's really a conversation for future months and years.

One of the immediate conclusions, though, is that he seems to have endowed his side with a bullishness. It’s not manifesting in chest-beating clichés, but instead in a determination to be something other than Old Arsenal. It’s as if, together and encouraged by Arteta, this group has grown tired of the jibes and become sick of being the punchline. Veteran performers like Luiz and Mustafi continue to clown around, but – elsewhere – there’s the spirit of retaliation in the air.

It first flickered against Bournemouth, in that comeback from a losing position. It was felt again at Selhurst Park, as they rallied in the aftermath of Pierre-Emerick Aubameyang’s red card, and here it was once more, in another part of London, inside a stadium which has mocked them time after time.

Are Arsenal – yes, Arsenal – actually enjoying adversity?  Are they being energised by the challenge of proving themselves to be different?

Perhaps so, because they had every excuse available to them at Stamford Bridge. Had they not found a second equaliser, they would still have received the sympathetic obituaries. Journalists would still have praised their performance and, most likely, concluded that they were the better team for long periods. Not even the ambulance chasers on YouTube would have given them any grief, reasoning that a 2-1 loss might have been much, much worse.

But back the 10 men came for a second time and there was Hector Bellerin with the captain’s goal, which fluttered into Kepa's far corner.

You can tell a lot by the way a crowd responds to something. If the television cameras get the right angle and peer into the faces of supporters as they celebrate, that can sometimes find the finer detail. When Bellerin equalised there was joy in amongst those Arsenal limbs, certainly, but there was also a manic, slightly startled look. Remember that fan with the corkscrew curls seen at Old Trafford in 1998? A lot of them had his expression - more wild than happy, more caught in disbelief than actual celebration. To them, it looked significant.

Individually, it’s not a result worth that much, of course. A point doesn’t do Arsenal any good given their deficit in the table and - obviously - nobody makes a DVD after a draw. But while it would be premature to announce it as a new standard, it was still proof of another way. It was something different, perhaps even the beginning of something tougher, stronger and ultimately better.