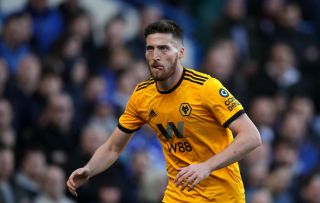 Matt Doherty is targeting FA Cup glory as he aims to turn a good season into a great one on both the domestic and international fronts.

The Republic of Ireland wing-back was a key member of the Wolves side which dumped Manchester United out of this year’s competition at the quarter-final stage last weekend.

And as he prepares for Saturday’s opening Euro 2020 qualifier in Gibraltar, he has already set his sights on a big day at Wembley.

Nuno Espirito Santo’s men face Watford in the semi-finals with either Manchester City or Ireland team-mate Shane Duffy’s Brighton awaiting the winners, and Doherty sees no reason why they should not lift the trophy to cap a remarkable campaign.

Asked if Wolves can win the cup, Doherty replied: “Yes, of course. I know Manchester City are still in there, but we have managed to avoid them. I know they’ll be favourites, but we have drawn with them this season.

“I know they beat us at the Etihad, but in the semi-final, it’s a 50-50, one-off, anything is possible and we have got a good team, so yes, we’re capable of doing it.”

Wolves’ 2-1 victory over United which booked the showdown with the Hornets wrote a new chapter in the story of a season which has seen the Premier League newcomers take to life in the top flight as if to the manner born.

Doherty said: “Our record against the top-six teams is pretty good and we were at home at Molineux, so we actually expected to win the game and fortunately we did win the game.

“Now we have got a big semi-final to look forward to and we’ll expect to win that too.”

Doherty’s club form will do him little harm on the international stage too, although it is perhaps a change of manager which may finally open the door for him.

The 27-year-old was a frustrated by-stander for much of his time in the squad under previous boss Martin O’Neill.

But the arrival of Mick McCarthy – the pair worked together during the Yorkshireman’s time in charge at Molineux and Doherty described him as “a very good man-manager” – is likely to be a positive for him.

Asked if he felt he should have started more games under O’Neill, of whom he was openly critical following the Derryman’s departure in November last year, he said: “I would like to think so personally, but I don’t pick the team and it didn’t work out for whatever reason. Hopefully, that will be different.

Doherty will hope to get the nod on the artificial pitch at Gibraltar’s Victoria Stadium with the Republic desperate to erase the memories of their disappointing Nations League campaign by taking maximum points from that game and the visit of Georgia to Dublin three days later.

He said: “We need to get off to a good start for us and our manager. We need to beat Gibraltar on Saturday – if you slip up there, that wouldn’t be good – then the home game against Georgia, which will be a bit more difficult as they are quite technically good and better than people might think.

“The first two games could make all the difference.”