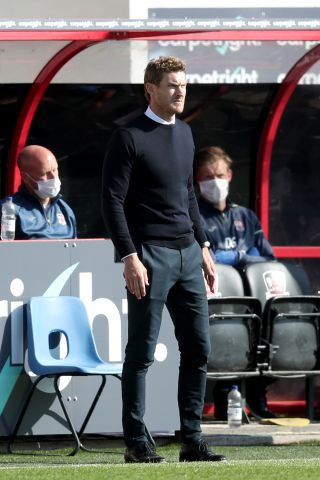 Exeter manager Matt Taylor could not hide his pride as his Grecians side reached the League Two play-off final after a 3-1 win over Colchester for a 3-2 aggregate triumph.

Trailing 1-0 from the first leg, the Grecians wasted no time in levelling things up thanks to Aaron Martin’s sumptuous strike and they went ahead in the tie when Jayden Richardson’s effort squirmed through the body of Colchester goalkeeper Dean Gerken.

Colchester rallied and levelled it up once again through Courtney Senior 12 minutes from time and the men from Essex finished strongly with Johnny Maxted making a brilliant stop to deny Kwame Poku in stoppage time.

Both teams looked out on their feet as the game drifted through extra-time but in the 112th minute, Ryan Bowman sprung the offside trap to latch onto Archie Collins’ pass and rifled a brilliant low shot into the bottom corner to send Exeter to Wembley for the third time in four years.

“This was a huge moment for this group of players and they deserve to celebrate with the fans, but I am sure the fans will be celebrating somewhere,” Taylor said. “Hopefully they have a few pints on us, but we are so, so disappointed we won’t be walking out at Wembley in front of our fans.

“We are one game away now. One game away from what we set out to do at the start of the season. It’s a huge opportunity and will take a monumental effort – something similar to today – but the players have to seize this moment for what it is.

“It is a fantastic achievement, we are one game away and I could not be prouder of that group of players tonight.

“They would have been lauded as heroes and rightly so, but we don’t want that to be our moment. We want our moment to come at Wembley.”

Colchester boss John McGreal said: “We really fancied our chances and I think we let ourselves down a little bit starting the game. We had to wait for the drinks break to change things around and then we got a real good foothold in the game.

“Then we started the beginning of the second half, we started slowly and they got the goal.

“Courtney came on and injected a little bit of energy and pace and we got a goal back. It could be a different interview now because I thought for the last 20, 25 minutes of the second half, we were the most dominant team and we should have won the game of football.