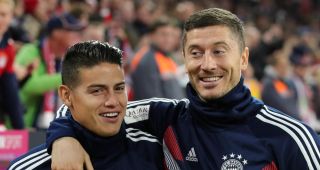 Lothar Matthaus described James Rodriguez and Robert Lewandowski as "players who only think of themselves" in an attack on Bayern Munich's underperforming stars, while giving his backing to embattled coach Niko Kovac.

James was given his third Bundesliga start of the season against Borussia Monchengladbach on Saturday but both he and Lewandowski failed to impress as the German champions slipped to a 3-0 home defeat.

Bayern are fifth in the Bundesliga table after a run of four games without a win and Matthaus took aim at James, who is reported to be growing impatient with a lack of first-team opportunities at Allianz Arena.

Lewandowski, who has scored three goals in six Bundesliga games while being subjected to squad rotation by Kovac, also bore the brunt of Matthaus' ire, along with Arjen Robben and Franck Ribery.

"There are too many players who only think of themselves," Matthaus told Blick. "Players like James and Lewandowski stand over the club, as well as Robben and Ribery.

"One person complains that he plays too little, the other he gets too few balls, and the third criticises substitutions or howls out at journalists."

Matthaus, who won seven Bundesliga titles over two spells at Bayern during his playing career, said James' performance in the most recent defeat gave the Colombia international little room to be critical.

James enjoyed a run of good form when Jupp Heynckes was placed in temporary charge of the club last season but Matthaus called for the 27-year-old to show more commitment to the cause under Kovac.

"Just because Kovac does not hug him as often as Jupp Heynckes does, does not mean he can react so furiously," said the 1990 World Cup winner.

"And yet on the pitch he shows no reaction. No sign came against Gladbach."

Kovac faces a run of four consecutive away games after the international break, with the first opportunity to end Bayern's winless streak coming against Wolfsburg in the Bundesliga on October 20.

Matthaus backed him to succeed, saying: "He's an ambitious guy with a plan, a football maniac. He is the right man to turn things around."