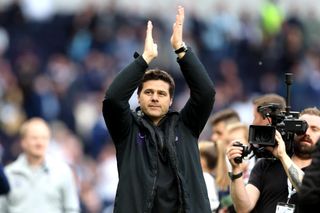 Tottenham boss Mauricio Pochettino has told his side they must “write history” as their attention now turns to the Champions League final next month.

Spurs signed off their domestic campaign by drawing 2-2 with Everton, booking a fourth successive top-four finish in the Premier League.

With the biggest game in European club football against Liverpool to come on June 1, Pochettino can sniff the glory.

“I think we can make history,” he said. “We are creating history because we are making it, but if we can win we will write history and change the perception of this amazing club.

“Of course the club and the fans and we all deserve to be focused on the way and how we can win the final.

“That is the principle objective, there’s not another objective.”

Although they missed out on a fourth top-three spot in a row, Pochettino ranks this campaign, regardless of what happens in Madrid, as the best of his five years in charge.

Spurs have been battling against the odds from the start of the season, as they have come up against a crippling injury list, went through two transfer windows without making any signings and did not get into their own stadium until April.

“This group of players deserve so much credit. They have put so much unbelievable effort in. There have been many positives this season.

“The players and staff have shown so much character. We broke down all the doors when the circumstances were against us with the new stadium stuff.

“So to see their capacity to fight again makes me so proud. I think this is our best season in our five years.

“I am so happy, so pleased. What we have achieved this season – top four and final of Champions League – it is difficult to assess now but in time the people will realise what we achieve.”

Everton boss Marco Silva’s goal is to try and crack the top six’s dominance and their late-season form suggests they could be closer next term.

Much will depend on their ability to keep their best players, with defender Kurt Zouma and midfielder Andre Gomes both ending their loan spells.

Silva wants to keep both of them at the club, though Gomes has been heavily linked with a move to Spurs.

On the Barcelona loanee’s position, Silva said: “I know all the rumours around. The most important thing is what comes from Andre.

“At this moment, he has had nothing new to say to me until now. This is the most important thing.

“I am 100 per cent sure when something is decided in his mind, I will be one of the first people to know. As a club, we have to do everything to sign him.”

He added: “One of the keys for us and for our fans is to keep the level we have.

“The starting point for us will be to keep the same level we have because just in this way we can improve.

“Keep the level and attack the market in the key positions which we should attack should improve our squad.”