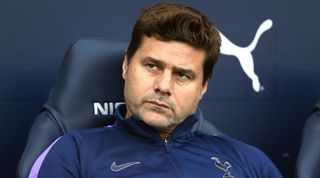 Mauricio Pochettino says he is “calm” and “relaxed” despite coming under pressure for Tottenham’s poor start to the season.

Spurs have won only three of their opening nine games in the Premier League and were also knocked out of the EFL Cup by Colchester in the second round.

A 5-0 thrashing of Red Star Belgrade on Tuesday suggested that the north Londoners may have turned a corner, but that was their first victory in the Champions League this term after a draw with Olympiacos and 7-2 demolition by Bayern Munich.

Some have suggested that Pochettino has taken Spurs as far as he can and that the club should begin the search for a new manager.

However, the Argentinian insists he does not feel the pressure as he prepares to take his side to Anfield to face Liverpool on Sunday.

"I am more relaxed and more calm than I was five years ago,” he told Sky Sports. “I am a coach and a person that doesn't really feel the pressure or the stress.

“I love to have different experiences in my life and of course, if you win, it is easier but when you don't win, you need to stay calm and show the balance too.

This is a situation we use to learn and improve, and to enjoy too, because it is football and the drama of football is not the drama of life, that is why we feel very responsible. We care a lot about our job, the football club and our fans but most importantly, it is a game.

"I feel great because you always need to be optimistic when you face problems. You have to be positive, it is the only way that you can change things.

"If you are not optimistic and you are negative, it is better to put the white flag up but I am not a person like this. I am a person who loves to face the problems and try to find a way to fix that.

"We are a group of people who love to face the problems and to behave the same and natural, that is the most important thing. We are all here to try to compete and to try to win but even when you don't, you have to be positive and be strong with your ideas and your principles."

Tottenham will move into the top six with victory over Liverpool but will fall 16 points behind the league leaders if they are defeated at Anfield.