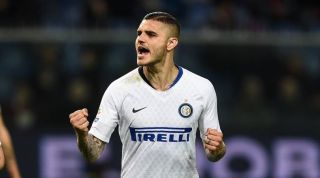 PSG are poised to complete the loan signing of Inter Milan striker Mauro Icardi on Monday, according to RMC Sport.

The Argentina international has fallen out of favour at San Siro following the appointment of Antonio Conte earlier this summer.

Icardi is reportedly set to sue the Serie A side for £1.4m after being excluded from some of Conte's first-team training sessions.

It was previously reported that the centre-forward was only interested in a move to Juventus, but he now appears set to join the Ligue 1 champions.

PSG will bring Icardi to the Parc des Princes on a season-long loan, but the former Sampdoria striker will sign a new Inter deal before departing.

The Nerazzurri are keen for Icardi to extend his contract in order to protect his valuation ahead of a permanent sale next summer.