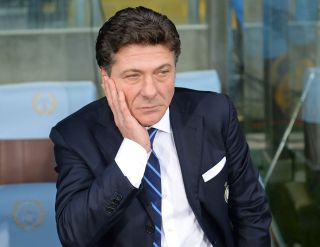 The visitors scored twice in four minutes midway through the first period courtesy of Rodrigo Palacio and Andrea Ranocchia, before Ricardo Alvarez put the gloss on the scoreline, tapping home in second-half stoppage-time.

After the match, Mazzarri offered effusive praise of his players.

"It was one of our best performances of the season," he told Sky Sport Italia.

"We also did very well against Fiorentina and Juventus, but were eager to come here and play as if we were on home turf.

"That's what I try to drill into my players, that the venue is irrelevant.

"We still need to improve on how we control the ball when in the lead, as we still tend to show off a little too much and that can compromise results.

"We've got to take our chances to kill off games, although this was an improvement from the 1-1 with Atalanta, as we were able to press them high."

The win extended Inter's unbeaten run to four matches and they remain undefeated on their travels in the league.

Having praised the collective effort, Mazzari had positive things to say about a number of individual players.

He added: "(Fredy) Guarin has some wonderful skills and I always tell him he has to keep plugged in for 95 minutes. He needs to keep the ball when we're under pressure.

"I can only praise Alvarez, as he works with quality and quantity. He's doing extraordinary things at the moment.

"You can see Esteban Cambiasso is a great player and has a sense of position, as when there were errors he'd always be in the right place at the right time to clean up.

"He's back to being the player I remember seeing under Jose Mourinho."

Mazzarri remained cautious when asked about the possibility of spending money in the January transfer window following the arrival of new owner Erick Thohir.

"I haven't spoken to the new majority shareholder," he said.

"He sent a letter to say he admires me, but I always spoke to President Massimo Moratti or the directors.

"Throughout my career I have said there's no point getting new players in mid-season unless they are a big reinforcement to what is already there."