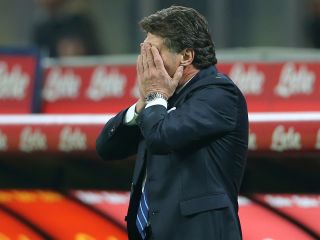 Goals from Alexander Farnerud and Ciro Immobile twice gave Torino the lead but they were pegged back by equalisers from Fredy Guarin and Rodrigo Palacio, before Palacio put Inter ahead in the second half.

But Nicola Bellomo's late free-kick deceived Carrizo and flew in at the back post to earn the hosts a draw.

Inter’s sporting director Marco Branca faced the press instead of Mazzarri, whose frustration with the performance of referee Daniele Doveri was clear.

"(Mazzarri) was irritated by the way the game went and certain decisions, as we all are," Branca told Sky Sport Italia.

"We can start from the penalty, then a few free kicks given and not given. The refereeing left us somewhat perplexed.

"It was a great game and hard-fought, so it deserved a better refereeing performance."

He added: "Ishak Belfodil was constantly kicked and then given the free kick against when he tried to get back into position, while Esteban Cambiasso’s booking on Cerci was also strange. We were perplexed by some of the decisions."