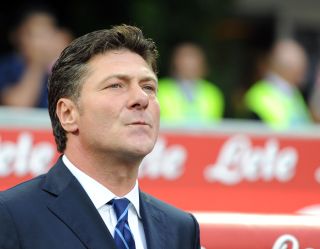 Serie A champions Juve had the better of the match but Inter took the lead in the 73rd minute as substitute Mauro Icardi latched on to a throughball from Ricky Alvarez to slot home.

However, their advantage did not even last two minutes as Arturo Vidal netted the equaliser after excellent work by Kwadwo Asamoah, but Mazzarri was happy enough with a point.

He told Sky Italia: "We were able to keep up with Juve, a team that is already established, and in the second half we also tried to get the win.

"I saw the Inter I wanted. We did great things against Genoa and Catania, but against Juventus we wanted to check our approach.

"We were nervous. We felt the importance of the game. However, I received the answers I wanted and I am proud of this team."

Mazzarri felt that there had been a potential handball for Juventus' goal, but in the end he refused to dwell on what might have been.

"To me there was touch of the hand of Vidal, but we could also mention the possible second yellow card for (Stephan) Lichtsteiner," he added.

"However, we are commenting on things that are arbitrary. We will just think of the game."