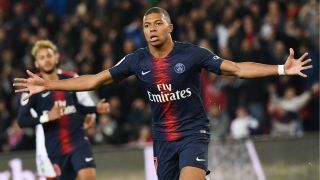 It has been quite some year for Kylian Mbappe and 2018 just keeps getting better for Paris Saint-Germain's talismanic teenager, who scored four goals against Lyon.

Lyon were chosen by many to be PSG's biggest rivals for the Ligue 1 title this season but France star and World Cup winner Mbappe tore that theory to shreds with a rampant performance on Sunday.

The 19-year-old, who won the penalty for Neymar's opener, scored four goals in the space of 13 second-half minutes to help PSG claim an emphatic 5-0 victory at Parc des Princes, with Thomas Tuchel's side now eight points clear at the top of Ligue 1.

That haul sent the records tumbling, with no other player having scored four goals in a single Ligue 1 match quicker in the 45 seasons since Opta records began.

And if that was not enough, Mbappe also became the youngest player – at 19 years and nine months – to score four goals in one game in the same amount of time.

Tuchel, meanwhile, has now won all nine of his Ligue 1 games in charge, and PSG are the first side to have achieved that feat in the history of France's top-flight.

9 - are the first team ever to win each of their first nine games of a single season in the history of Ligue 1. Ogre.October 7, 2018