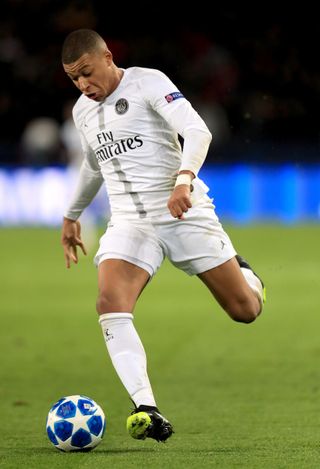 Despite missing several key men, PSG restored their lead at the top of the table to 20 points with an eighth straight league victory.

After Eric Maxim Choupo-Moting sent an early effort over from close range, Marquinhos saw a goal ruled out by VAR for offside.

As half-time approached, a fan wearing a PSG training top made it onto the pitch and sprinted towards Mbappe in the centre circle.

The France forward appeared initially shocked, before putting his arm around the man, who snapped a selfie before being quickly apprehended by security staff and marched off.

Fittingly it was Mbappe’s moment of quality which settled matters in the 74th minute.

The 20-year-old World Cup winner took a cross from the right down with a superb first touch before drilling the ball into the far corner.

Toulouse, who had won just one match from the past six at home, started brightly but lacked a cutting edge in front of goal, something shown so ruthlessly by Mbappe.

Casanova said: “We deserved to take a point. I am frustrated for the team.

“Paris almost never put us in trouble defensively. We had two big chances and when that happens against this kind of team, we have to score and we did not do it.”

The Toulouse boss, though, could not help but be impressed by Mbappe’s clinical display.

“It is an extra-terrestrial who makes them win the match, but we managed to cause them problems. (PSG goalkeeper Alphonse) Areola made two miraculous stops,” he told reporters.

“We have to get over the disappointment of missing such a big opportunity.”

It would appear only a matter of time before PSG secure another title, which could come as soon as next weekend with another win over Strasbourg at the Parc des Princes should second-placed Lille fail to beat Reims.

PSG coach Thomas Tuchel, though, wants to take things one step at a time, with little time to recover ahead of the midweek French Cup tie against Nantes.

“After the international break, matches are never easy. There are many matches, trips… the players come back tired. We felt it this week in training,” Tuchel said at a press conference.

“This match is a big obstacle that we overcame with mentality and personality.

“We played and never let go. It’s good. We stayed calm and confident, which was necessary to win this game.”