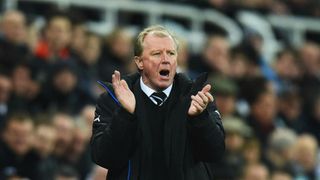 Newcastle United head coach Steve McClaren says he will be forced to field a much-changed XI for Saturday's FA Cup trip to Watford but insisted the club want to progress in the competition.

The Premier League strugglers sit 18th in the table - two points off safety - but have the chance to build some much-needed momentum in their third-round clash at Vicarage Road.

Newcastle have often been accused of not taking the competition seriously in recent seasons - fielding weakened sides as they bowed out at the first hurdle in each of the past three campaigns.

The St James' Park club have not progressed past the fourth round since 2006 but, with Papiss Cisse and Vurnon Anita among those doubtful, McClaren will need to shuffle his pack.

"We want to win and we want to gather momentum. It is a chance to do that. The performance last week [in the 1-0 defeat to Arsenal] was excellent but we didn't get the result," he told reporters.

"We have one or two players who have got niggles. It is a big risk and we have to decide if we play them or not - what the risk is in terms of another game in three days.

"We will assess it but you can guarantee that it will be the strongest team we can possibly put out without taking a huge amount of risk.

"We have to field a strong team tomorrow because we want to win the game. We need the squad to step forward. We need everyone. Everyone has to be ready."

Peripheral figures Florian Thauvin and Siem de Jong could be handed rare starts against Watford, while Cisse is likely to be back in training next week.

"You can name all the individuals and we will deny every one because nothing is happening as yet," he added.

"We're aware of [the speculation] but we just have to do our business privately and not to get people too excited or get expectations too high.

"It's part of the theatre, the January window. It's a media frenzy to put names out there. As I say, we quietly go about our business as normal."