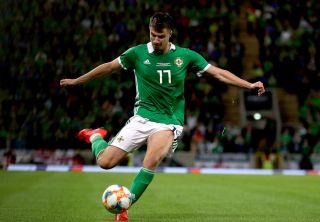 Northern Ireland need to pick up points on the road in order to keep their dreams of reaching next summer’s finals alive, but few will be backing them to come out on top at De Kuip.

Michael O’Neill’s men came through their first four qualifiers, home and away to Belarus and Estonia with 12 points from 12, but as the difficulty level took a step up they suffered their first setback last month with a 2-0 defeat to Germany at Windsor Park.

That scoreline did not tell the whole story, however, something McNair hopes the Dutch did not spot.

“Before kick-off we were all up for it and for the first 25 minutes I don’t think the Germans knew what hit them,” he said.

“The Dutch are such a famous nation. Some of their players might not know much about Northern Ireland and think it will be easier than it will be.”

Lyon’s Memphis Depay is another dangerman and a player McNair knows from their time as team-mates at Manchester United.

Though Depay’s £25million move to Old Trafford from PSV Eindhoven did not pan out as hoped, he has flourished since moving to France in a way which has not surprised McNair.

“Ever since Memphis was 16 or 17 you heard about him because he was the superstar at his age and it was no big surprise when he came to Man United,” he said.

“A couple of lads played with him at PSV and said how talented he was. He had a very good start but then he had a tough period.

“He’s a very talented lad and when I left, I had no doubt he’d go on to do really well.

“Hopefully he doesn’t show it so much on Thursday night.”

McNair believes Northern Ireland can take confidence from the way they played against Germany, looking solid defensively for long spells while creating chances of their own.

“Holland are a world famous nation with world-class players so it is good to come up against them and test yourself against a world-class nation.

“After these games you get to see where you are personally and where we are as a team.

“We are still joint top and all the incentive we need is trying to qualify for a major tournament.”