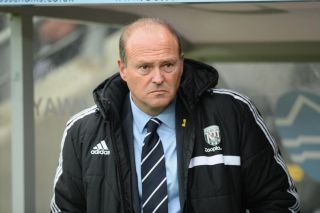 Mel was appointed at The Hawthorns in January, replacing Steve Clarke, and has eased the threat of relegation with the club four points clear of 18th-placed Norwich City.

However, the Spaniard has won just three Premier League matches since taking charge, and only claimed a first maximum haul on home soil in Saturday's 1-0 victory over West Ham.

With several players out of contract at West Brom, there appears to be plenty of change on the horizon at The Hawthorns in the close-season.

Mel's own future remains shrouded in doubt, and the 51-year-old is set to meet chairman Jeremy Peace in the final week of the campaign.

""We have a meeting in the week that the season ends, and it's then that we'll talk," said Mel.

"We need to sit down, the chairman and myself, and we need to look at what he wants for the future.

"It really does depend on whether it will be with me.

"There are a lot of players who are going to be out of contract, so it's very much a case of creating a new team.

"The make-up of this team will be very important, that will define the future.

"We've spoken about the fact that for me the month of April was the most important, and during the month we've got a lot of points.

"I think the team is continually looking more similar to what we work on during the week. But we've still got three games to go and we need to finish as high as possible."