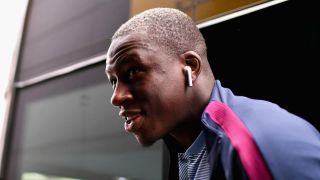 Manchester City defender Benjamin Mendy is facing the possibility of months on the sidelines due to a knee injury, according to manager Pep Guardiola.

The France international suffered the injury during City's 5-0 win over Crystal Palace on Saturday and is set to travel to Barcelona to have the problem assessed by knee specialist Dr Ramon Cugat.

Following his side's 2-0 win over Shakhtar Donetsk in the Champions League, in which Fabian Delph deputised for Mendy at left-back, Guardiola was asked if he is likely to be without his £52million signing for months and he replied: "Yeah.

"The day after tomorrow he is travelling to Barcelona. We are going to see finally what he has.

"We will wait until Thursday but I am pretty sure it will be longer than we expected."

The Spaniard compared Mendy's plight with that of Ilkay Gundogan, who sustained knee ligament damage early in his City career, curtailing his first season in December 2016.

"It is really frustrating for him, first as a person, but like what happened with Ilkay Gundogan last year, I am sad for him," Guardiola said of Mendy.

"We will lose a lot. He is a unique player - the joy he gives inside and outside the pitch. It is a major setback."

"He understands and he played an amazing game," said Guardiola. "He is a midfield player, he is so clever. He did not miss one pass.

"I am so, so happy for him. Last year it was a regret for me that he did not play more minutes but now I think he is going to play more often and hopefully he can have a good season."

PEP: Delph impressed a lot. He is a nice guy with no complaints when he doesn't play or is injured. He played an amazing role.September 26, 2017

Shakhtar Donetsk coach Paulo Fonseca, whose side were undone by second-half goals from Kevin De Bruyne and Raheem Sterling, reflected on a tighter game than many at Etihad Stadium expected.

City have been indomitable in recent weeks but Shakhtar matched their hosts in the first half and might have taken a share of the spoils had they been more clinical.

"I am unhappy because we lost but must be proud with the way we played," said Fonseca. "We showed great courage with the way we behaved on the field - we tried to play, and keep possession and we were attacking very well.

"I always watch all the matches of City and this year City have not met a team who has created any problems and that is why I am not happy with the loss.

"It is difficult to come here and demonstrate such courage as our guys have."