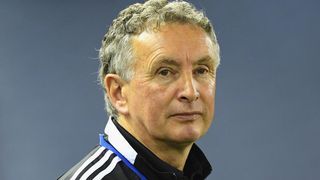 The Newcastle Jets have appointed experienced coach Ernie Merrick as their new boss on a two-year deal.

Merrick, 64, is a two-time A-League Coach of the Year and won two premiership-championship doubles with Melbourne Victory.

He was last in charge of Wellington Phoenix, resigning in December, and takes over a Jets side which finished bottom of the table in 2016-17.

"Newcastle Jets is a great club and is based in a region which has an outstanding football history," Merrick said in a statement.

"I believe that the club has all the necessary ingredients for on-field success with a strong core of good quality players, a very competent staff, excellent facilities, and most importantly a wealth of extremely passionate fans.

"My role is to continue to resource and build the squad, engage with the community and to re-establish the club as a major competitor in the Hyundai A-League.

"I very much appreciate this exciting opportunity that owner Martin Lee and CEO Lawrie McKinna have given me to commit to this challenge."

. Merrick will arrive in Newcastle as one of the competition's most successful managers having won two Championships. May 8, 2017

Despite once appearing finals contenders, the Jets went on a 10-match winless run to finish the campaign, leading to the sacking of coach Mark Jones.

Jets chief executive Lawrie McKinna said: "At this point in the club's development we believe it is crucial that someone with a deep understanding of the Hyundai A-League both on and off the pitch takes charge of our first team and football department.

"Ernie brings this in spades, and not only the first team but everyone associated with the club should benefit from his knowledge, experience, and winning mentality in some way."