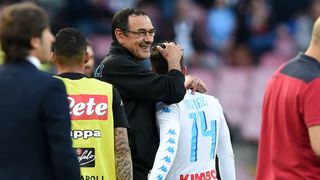 Napoli star Dries Mertens is convinced his former coach Maurizio Sarri will prove he is "world class" should his rumoured switch to Chelsea materialise.

But he soon departed the club, as president Aurelio De Laurentiis grew impatient with the 59-year-old's indecision regarding his future, hiring Carlo Ancelotti as a successor.

Mertens is adamant there is no doubt about Sarri's abilities, however, and should he replace Antonio Conte at Chelsea, the Belgian predicts he will prove himself to be among the world's best.

Speaking to Sky Sport Italia, Mertens said: "Sarri is a world class coach and he will prove it.

"Everyone he has coached has made important steps forward in terms of their quality and I'm convinced he will find a great team where he can prove just how good he is."

Mertens does not expect to follow Sarri out of Napoli, however.

"To be honest, I want to try winning in Italy," he said. "I am very happy at Napoli."