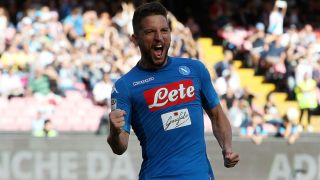 Napoli star Dries Mertens says he should not be compared to Diego Maradona following his wonder strike against Lazio on Wednesday.

The Belgium international scored a spectacular long-range lob from a tight angle to help his side come from behind to win 4-1 in at the Stadio Olimpico.

The goal, which helped Napoli maintain their 100 per cent start in Serie A, has been compared by some to a Maradona strike against the same opposition back in 1985.

Mertens, however, says he should not be likened to the Argentina great.

"I saw the ball there and I thought of the shot," he told Mediaset Premium. "I am very happy with this goal but the most important thing was to win the game.

"Mine was further out than Maradona, so I get extra credit! I turned around, saw the goalkeeper was getting slowly back to his line and that there was a small gap, so I said to myself: 'go for it'!

"It's thanks to my team-mates if I'm able to score goals like that. I am not Lionel Messi, I'm not Maradona, I'm just Dries and I'm happy with that."

Mertens hit 34 goals in all competitions last season and has begun 2017-18 in similarly ruthless fashion, scoring six times in five Serie A games.

The 30-year-old has established himself as one of the most dangerous attackers in Europe since being converted to a central role last October, following a serious injury to Arkadiusz Milik.

Napoli head coach Maurizio Sarri admits he wishes he had made the positional switch sooner and says Mertens' form places him among the very best in the world.

"I want Mertens to be like an animal, starving for goals. Frankly, I was fortunate to discover him as a centre-forward, because I had to make the change when Arek Milik was injured last year, but we didn't think he would become like this.

"It's honestly a pity that we only discovered Mertens as a striker at the age of 28, because he could have been at the top level in the world for years and years."