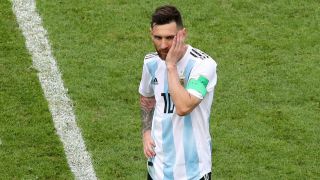 Lionel Messi opted not to speak to the media after Argentina were knocked out of the World Cup by France.

Messi recorded two assists but could not score as Jorge Sampaoli's men bowed out of Russia 2018 following a 4-3 defeat in Kazan.

The Argentina captain only scored once in four matches at the finals and is still yet to score a World Cup goal in the knockout rounds.

And amid speculation he could retire from international football for the second time in his career, Messi did not stop in the post-match mixed zone.

Messi previously stepped away from international duty following Argentina's defeat in the Copa America final to Chile in 2016, having missed a penalty in the shoot-out.

Javier Mascherano, 34, retired from international football in the wake of the France loss, but Sergio Aguero told Tyc Sports he intends to continue representing Argentina.